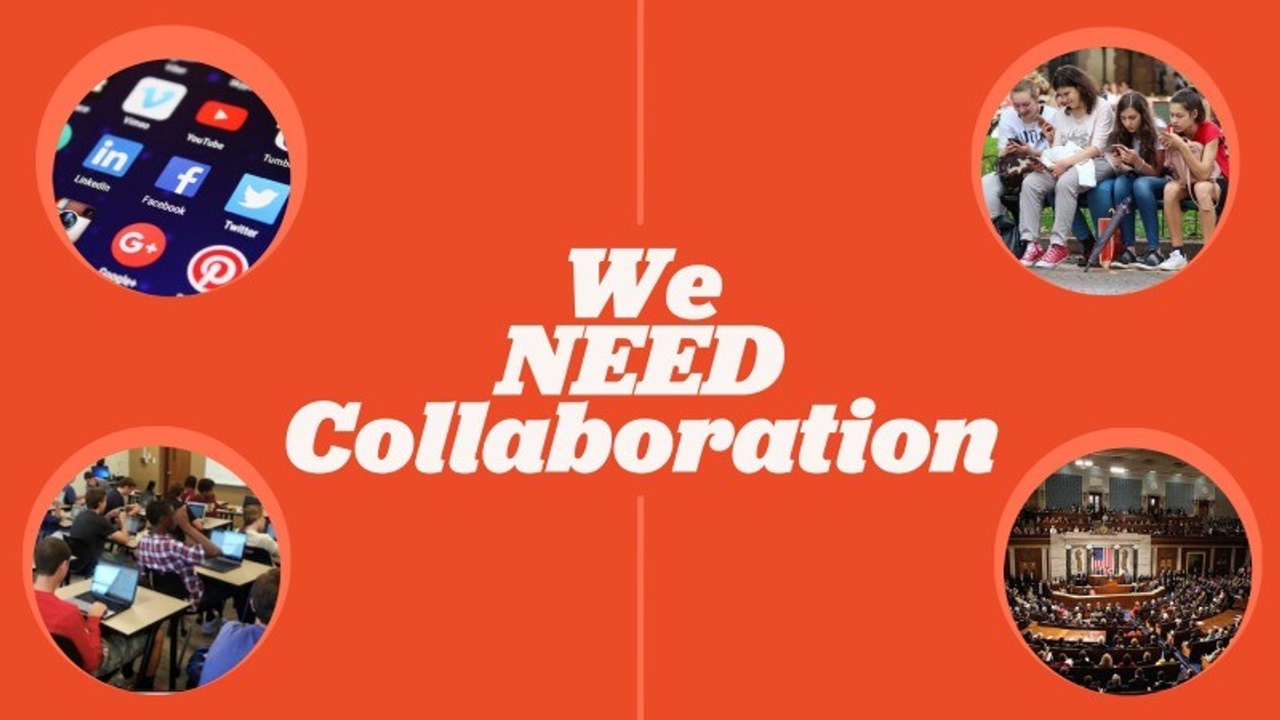 Teaching Collaboration Is Needed Now More Than Ever

Our society, now more than ever, desperately needs people who know how to work together. Colleges and universities are demanding more and more collaboration from current and prospective students. Industry is begging K-12 education to teach collaboration so students can excel in the modern workforce. Whether they work for an open-space tech company or even in a modern factory, people must know how to solve problems and achieve goals by working in a team environment. The political world desperately needs people who know how to collaborate and work together (Can I get an amen?).

Yet the American education system, a system all 327 million of us go through, too often does very little to teach this increasingly critical skill. The school system as a whole, with its common standards, testing, and teacher evaluations, is primarily about individual achievement.

The 21st century needs people who know how to work together, and so one of the primary objectives of school should be teaching collaboration.

But you’ve heard all this before. We know the world needs collaborators and that schools should emphasize real collaboration more. But you’re also probably thinking:

Yeah, I get it, kids need to learn how to collaborate. They tell us this at staff meetings all the time, but, clearly, you’ve never tried to get thirty 12-year-olds to work together in groups.

Try getting students who sit in rows in all of their other classes walk like zombies into yours and have no interest in working with others.

You must have never had to deal with a parent who freaked out because their kid got the same grade as everyone else in their group.

Have you ever had a principal who wants quiet and hyper-controlled classrooms?

You must have never had to prepare your students for standardized tests.

The list goes on. To be honest, I have experienced all of these situations. I still have nightmares from the first time I tried group work with middle schoolers. I totally get the pushback.

Collaboration is difficult. Teaching collaboration—and making group projects genuinely meaningful—can be extremely difficult. There’s assigning groups, scheduling work time, and assessing students individually. It’s challenging to move a group of students out of an individual mindset and into a group mindset. It’s also tricky finding ways to prevent slackers from pulling a group down or bossy take-over students from doing all the work.

Why we often avoid teaching collaboration.

What often happens is that many educators remember how much they disliked group work in high school or college and swear they’ll never force that on their own students. Or maybe they actually try it, only to crash and burn, leaving their students in sheer dread of the next collaborative activity.

In my first year of teaching, I had an idea for a group project that would blow the doors off of my classroom. In groups of four, my students would interview actual World War II veterans and record the interviews with their parents’ cameras. They would take the footage and create documentaries to air at a local theater for the veterans, their families, and the rest of the community to see. My students, who were high school freshmen, would not learn about World War II from a textbook; they would get their information from people who’d actually experienced it.

I was a first-year teacher with stars in my eyes. What could possibly go wrong?

After preparing for the interviews, we piled onto a bus and went to a local retirement home to meet the veterans. When we arrived, I learned that half of the veterans were sick and would not be able to participate. I thought, “No problem, I’ll just combine groups and have groups of eight interview each veteran.”

Because what could possibly go wrong with putting my students in groups of eight?

Although the rooms were a little more crowded than I intended, and some kids could not see the interviews live and had to wait out in hallways, we captured the veterans’ stories and brought the footage back to school to create the documentaries.

That’s when the chaos ensued. It turns out only one person can really work on editing a video at a time. Most of the students played nose-goes or rock-paper-scissors, and one unlucky student was given the role of editor and had to sit at the computer poring over an hour of footage. I tried to think of other tasks everyone else could do, such as finding b-roll footage or creating subtitles, but those tasks quickly ran out, and the kid who drew the short straw continued doing the bulk of the work.

After several days of this, the class started veering out of control. I learned quickly that ninth graders with nothing to do can lead to pandemonium. We hadn’t covered that in teacher college! Kids were playing pranks on each other and running around the classroom. Some started working on homework from other classes. Others snuck out and began wandering around school, only to get walked back to my class by the principal, who asked me how they left my room without my knowing. I told her, in all honesty, that I was so busy helping the video editors work on the project that I hadn’t notice students leaving. All the while, those video editors were working under a tight deadline and were beyond frustrated that they were doing all of the work for the project. Their parents were frustrated as well and did not hold back on their criticism throughout the rest of the project.

At this point, I wanted to pull the plug and move on to other subjects because clearly too much time was being wasted, but I couldn’t. Our class had made a commitment to those veterans, and we couldn’t just scrap what we were doing. As a result, the next several weeks were total mayhem. By the end of the project, the films were substandard at best. Because only one student worked on it the whole time, the quality went down the longer they had to slave over it. Many details were missed, because only one set of eyes saw the film before it was presented. The final presentation to the veterans felt like a disaster when the audio of several films didn’t work, veteran names were misspelled, and some films weren’t even ready to play at all, leaving attending veterans without a film to their name. On top of this, my students learned relatively nothing about World War II, my confidence in my first year of teaching was shot, and I swore I’d never do a group project again.

Collaboration fails when there is no structure for it.

However, thanks to lots of trial and error and many, many tweaks along the way, I have completed that World War II project with my classes many times since that first year. (It turns out you forget your pain the further you get from it.) I now assign only two students to edit footage because I know that task requires a maximum of two people. Other tasks such as creating podcasts, creative writing, and artwork are assigned to other group members. I also use accountability systems and have project management techniques to schedule work time.

I have learned that collaboration wasn’t the problem with that first World War II project, it was the fact that there wasn’t any.

Teaching collaboration can be challenging, but it is not impossible.

I’ll take that a step further: when you have the right tools and processes to facilitate group work with your students, collaboration can provide some of the most gratifying, memorable, and transformational learning students will ever experience. When kids work on meaningful tasks that require collaboration, what they can accomplish is boundless. It’s especially effective when the collaborative task itself—and not just the teacher—requires that students contribute their varying skill sets, passions, and personalities to produce a specific result.

In a 2016 article for Research Matters, University of Cambridge researchers Simon Child and Stuart Shaw wrote that learning is actually more effective when done collaboratively than when done individually. They argued that collaborative learning has advantages over individual problem solving because it fosters an effective division of labor and incorporates multiple sources of knowledge and perspectives and more creative group solutions. Collaboration, they continued, has also been found to increase students’ social competencies or their abilities to help others and resolve conflicts.

I’ve seen this happen. When collaborating with others, students are no longer alone in processing information. They are sharing it and synthesizing it together. Problem solving is no longer limited to one brain but uses the intelligence and knowledge of a group.

Teaching collaboration is not only about preparing students for a future where they will need this skill. It’s maximizing their learning in the present. Learning to collaborate will actually help students succeed as individuals. Successful individuals will contribute to the success of a group, both emotionally and academically. The opportunities for learning are richer when in groups. Complex and meaningful projects can be accomplished in groups. Learning how to care for other people’s thoughts and opinions while representing your own happens in groups.

Teaching collaboration can be a key to success.

But it can only happen if we teach collaboration well and have tools and processes to make it effective. We must continually find new ways to inspire students to work together and realize what they can achieve when learning is becomes about us rather than me.

This is article is an excerpt from my latest book, The Collaborative Classroom, which is all about how to successfully teach students to collaborate and work together. Check it out on Amazon.