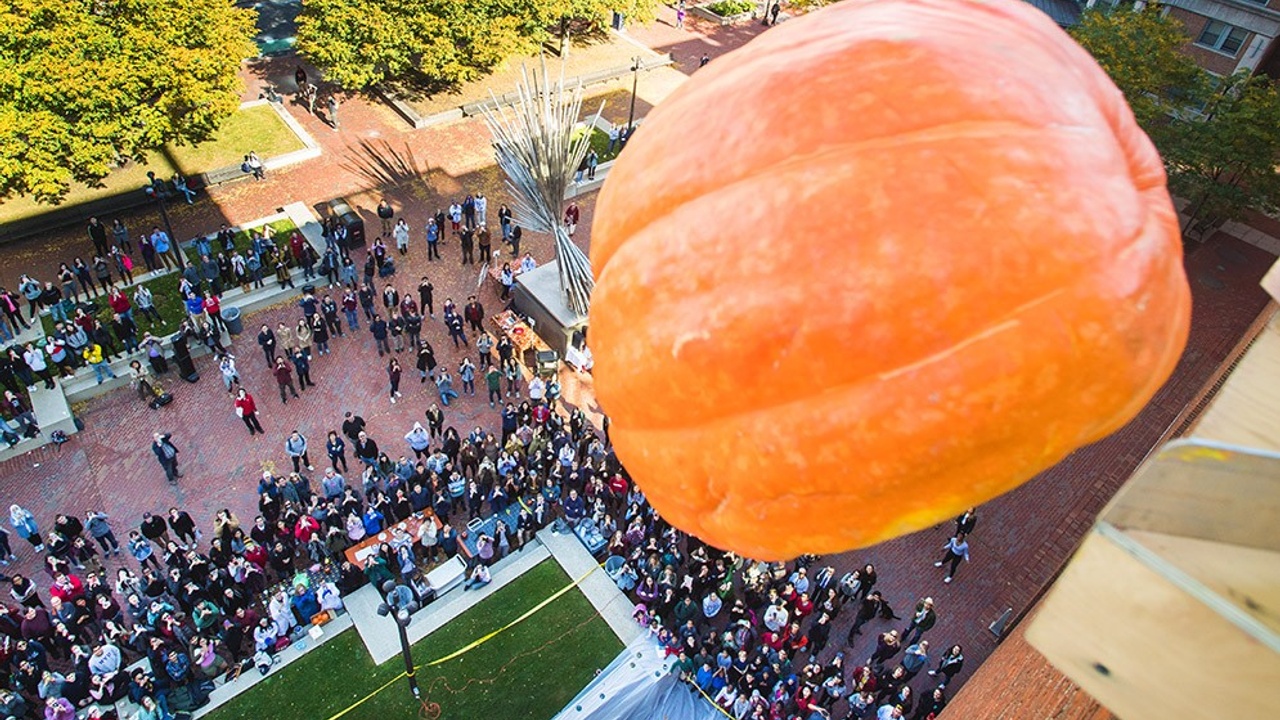 When Learning is Fun

I know a teacher named Gerry who teaches a cross-curricular Physics/Algebra II class. One year, Gerry had a class of very competitive students. All classes have their own flavor or brand to them, and this one could be characterized by their competitiveness. Gerry noticed that he had athletes, video gamers, and even artists who were motivated by trying to be the best at their crafts.

Obviously competition is just a part of what made up the reputation of this class to Gerry, but it was an obvious character trait of his class. So when November came that year, and the luster of the new school year was quickly wearing off and student engagement was going down, Gerry decided he wanted to utilize this class’ competitiveness. He wanted to use what was already present in his classroom and use it to engage his students.

And so came about the Great Pumpkin Drop project.

Gerry looked at a set of physics content standards dealing with terminal velocity and the speed in which objects fall when not faced with any friction (momentum, air resistance, impact, etc.) Using algebraic formulas and properties found in physics, students would have to become masters at predicting how long it would take for an object to hit the ground from certain heights. For weeks his students filled the hallways, standing on ladders and dropping things like golf balls and apples, timing the descent of the objects to the ground. They took their data and plugged it into formulas, and spent time discovering how the experience of terminal velocity related to theories and mathematics. All along the students knew that the climax of this story would be one of the greatest competitions in world history: The Great Pumpkin Drop.

Gerry called the city utilities department, and asked if they would be willing to send a bucket truck to our school for a morning to help with a class project. He also called a local pumpkin patch to see if they could donate a couple hundred pumpkins leftover from Halloween.

And then, on a cold November morning, a 60 foot bucket truck pulled into the parking lot of our school. Busses full of area elementary students followed closely behind to watch the action. A news van parked next to a tarp where the rotting pumpkins would smash hard on to the ground. Four hundred high school students poured out the front door of our school to watch Gerry, the epic science teacher, smash pumpkins against the asphalt from sixty feet up.

But the physics/algebra II class was not laughing as their teacher dropped the pumpkins from the sky. They were not entertaining the little kids who shrieked and screamed as gourds exploded on tarps stretched across the pavement. They were not even lining up to get on the evening news and gain a little local fame.

They lined the tarp with stopwatches in their hands to see if their predictions were correct. Their challenge was to use math and science to guess how long it takes for a twenty-pound pumpkin to fall sixty feet. The closest wins and gets to revel as the master of terminal velocity.

Engaging in the math and science was essential.

Students would not have a chance whatsoever of having the most accurate prediction if they did not master the content first. Therefore, math class had purpose for that month. There was finally clarity as to how algebra can be applied to something other than a quiz. Physics made sense in a way that it never had before for those students. If you ask any student who has taken Gerry’s class what terminal velocity means, they will be able to tell you in a way that is not theoretical, but instead in a way that was lived and breathed. The equation, V = sqrt ( (2 * W) / (Cd * r * A), is not just a set of numbers and variables anymore. They are the key to predicting the rate at which pumpkins fall to the ground, and ultimately eternal glory.

I will be clear, the students knew that winning this competition was not life and death, or even a huge deal whether they won or lost. But they worked hard and with enthusiasm because it meant more than a worksheet that would end up in a garbage can after being graded. Students like to solve problems and overcome challenges (like all humans), and this is one they could embrace in the classroom. Their teacher devised a plot for them to succeed and fail; ultimately to grow in.

It was designed to be. Gerry knew that having an epic outcome to this project, tying in a thrilling climax to the story and a competition to motivate his class, would create high levels of engagement. From an outside perspective, this project really might look like a bunch of time dedicated to high schoolers having fun. They laughed as they smashed eggs in the hallway. Half a class period was given to a trophy ceremony rather than pure content work. A whole morning was sacrificed so pumpkins could explode on school property.

But this project was not just created for kids to have fun. Gerry wanted them to be entertained and enjoy themselves, but he also wanted them to learn in a lasting and impactful way. So what might come across as chaos was really a carefully planned and executed project; a story that was thought up long before a pumpkin ever hit the ground.