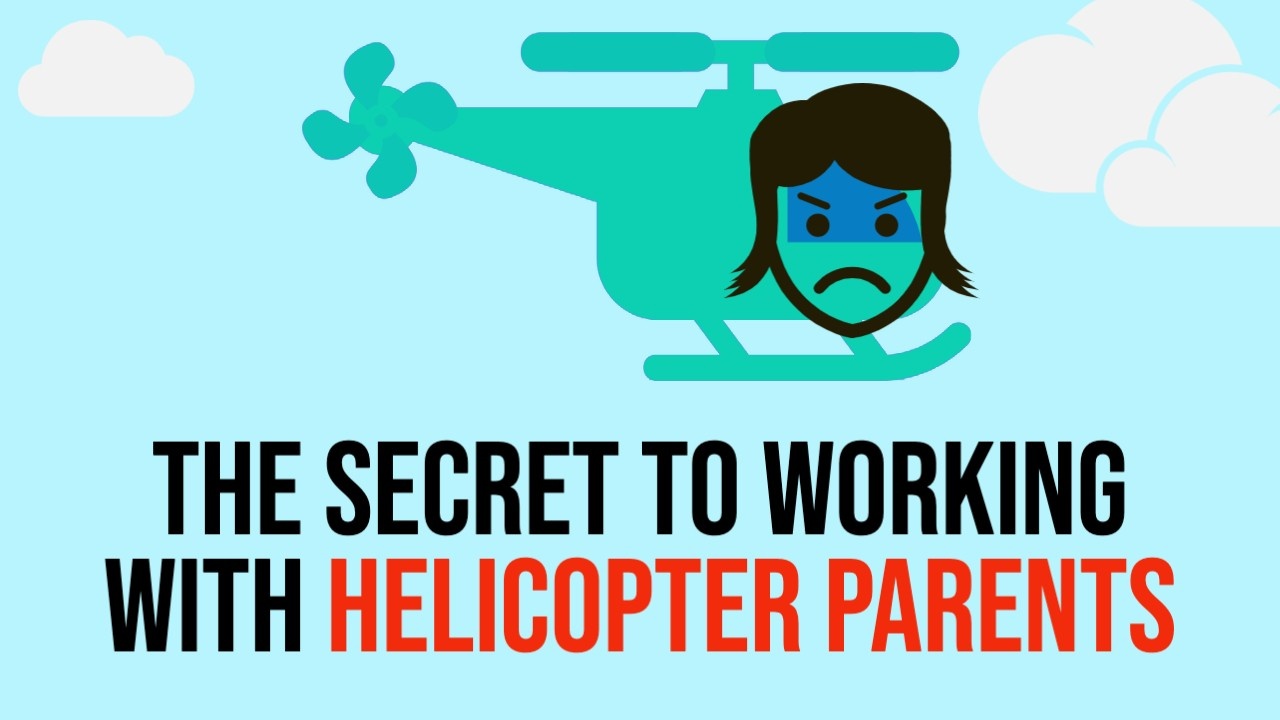 The Secret To Working With Helicopter Parents

Listen to the podcast for this article here on The Epic Classroom Podcast.

I once had a student named Chris who snuck into my classroom when no one was there, and he super glued every single one of my drawers and cabinets shut. Super glue! We're not talking about glue sticks or Elmers. In the middle of class, he and all of his friends thought it was so hysterical when I pulled the handle off the cabinet as I tried to wrench it open. Obviously I didn’t think it was very funny. (But looking back, that probably was extremely funny). But not at the time.

Chris used to hide food around my classroom so it would rot and smell over time. Every so often I’d find curdled chocolate milk hidden on the bookshelf, or moldy bread behind a potted plant.

Chris’ favorite game was to see how many times he could disrupt my class before I would lose my temper, and for several months I kept my cool when Chris would play flatulent sounds from his laptop or yell out obscenities when everyone was quiet. I would sometimes address Chris publicly or I’d meet him in the hallway to talk about his behavior, and then we’d get back to work. These corrections were temporary fixes, and his improved behavior never lasted long.

This student was slowly chipping away at my patience, but I was determined to find a way to engage him in class and not have to turn up my discipline more than I had to.

I once returned to my classroom after being sick for a day, ready to pick up where my classes left off. I got to my desk in the morning, and on top of my papers was a note from the substitute who covered my class. Usually these ‘sub notes’ have a summary from each class, and often say something nice like, “Great group of kids. Here’s my # if you need a sub in the future.”

This was not one of those notes.

The note said this: (In all CAPS) THIS WAS THE WORST GROUP OF STUDENTS I’VE EVER SEEN! THEY MADE ME CRY. WHAT THE HELL KIND OF TEACHER ARE YOU?”

The sub did not leave her phone number, so I’m guessing she didn’t want an invite back to my classroom.

When I saw this note, I was immediately angry with my class and determined to get an explanation. So the first thing I did that morning was ask what happened the day before. Kids sat awkwardly silent and looked at each other, until finally one kid spoke up and said they acted kind of rowdy. I said, “Kind of rowdy doesn’t usually lead to these types of notes from the substitute. What happened?”

After doing some digging, I found out Chris hid a remote controlled noise maker that produces flatulent sounds (I’ll just say it- a fart machine) in the classroom, and any time it got quiet, he activated the machine. When the substitute would ask who’s making the noise, everyone else would laugh. The more upset the sub became, the harder kids would laugh. Eventually she snapped and wrote a note to me in all upper case letters.

And this was the day my patience for Chris finally ended. I walked him down to the front office myself and wrote him a detention. I told him his lack respect for me and his classmates would no longer be tolerated, and that he was not welcome back in my classroom until he could apologize to me, the class, and even to that substitute.

Talking to the student's mother.

That afternoon during my prep period, I received a call from the front office that Chris’ mother was on the phone and wanted to speak to me. I thought, “Excellent, she’s probably going to offer to march Chris down to my classroom today after school and apologize. Just like my mother would have done with me.”

So I answered the phone ready to offer grace and allow this mother to apologize.

Instead I heard this: “Mr. Muir, who do you think you are? Chris texted and told me how he is not welcome back in your class and how you hate him. And for what, a silly prank? I am meeting with your boss tomorrow and moving Chris to another class, because this is unacceptable.”

I was dumbfounded. How could this person just hang up on her son’s teacher? Why didn’t she at least ask me why her son was being disciplined? Does she really believe I hate her son and that I am banning him from my class? Seriously, she hung up on me?!

Are all of the stereotypes about parents true?

I was angry, and I felt like this encounter confirmed all of the stereotypes that modern parents carry. That they are petty, helicoptering, obstinate enablers who work against teachers as they try to mow down every obstacle that stands in the way of their children. My anger was only amplified the next day when the parent demanded to my principal that I apologize to her for how I treated her son, and that I’d have to do it in person.

My blood was boiling that whole day as I awaited the meeting. Twenty minutes before Chris’ mother arrived, my principal came into my classroom during the prep period and said two things to me, one which I loved hearing and one I couldn’t comprehend.

First he said, “Trevor, this is bull crap. You disciplined Chris exactly how he should have been disciplined. It is ridiculous this parent thinks you should apologize to her.

And then he dropped the bomb: “Now you need to go apologize to her.”

Wait, what?! How could I seriously be expected to say sorry for doing the job she was supposed to do at home. I wanted to say that “I’m sorry for teaching your son some much-needed respect!”

The secret to working with helicopter parents.

My principal allowed me to air out my frustrations, and then imparted some wisdom that can only be gained after years of working with parents and students. He told me that this mom really loves her son. He said she cares more about him than anyone in the world and would do anything to make sure he is safe and succeeds. He also said this mom doesn’t realize that I have the same intentions for him, and that if I can make her realize this, if I can make her understand that I also want what’s best for him, she will become an ally like no one else.

So I met with his mom. And I started our meeting by swallowing my pride and apologizing for anything I may have done to mishandle the situation. Instead of making a bunch of excuses or listing all of the events leading up to Chris’ detention, I said I was sorry for the way things transpired and that I was hoping she could help me find a way to get Chris back on track in my classroom.

Immediately, the tension was drained from the room. My humility caught this mother completely off guard, and all of her anger and mistrust for me evaporated. She visibly relaxed her clenched muscles, and said, “Thank you so much for that. Chris really does love your class and I’m glad you are still open to working with him.”

That was the moment that my principal’s wisdom was confirmed. This mother didn’t think I was a bad teacher, she was worried that I was a teacher who had given up on her son. As soon as she knew that I wasn’t, we were able to have a great conversation. She opened up about the divorce she was in the middle of and how Chris had been acting out lately because of it. With tears in her eyes she shared about her own struggle she was having at home with him. We came up with a plan and she left on a positive note.

The result of having a parent-ally.

The next day, Chris got to my classroom 30 minutes before school and apologized to me. He said sorry for how he acted all year and promised me he would do better. I was shocked by his own humility and thanked him for his apology. Later that day I found out Chris was grounded for a month and his mother made him march in and say sorry that morning. She had my back.

Of course I think parents can be overbearing sometimes. I’ve seen my fair share of helicopter and lawnmower parents, and have even seen an uptick in this behavior the last 10 years. However, I think dismissing them with a label misses out on a huge opportunity. The fact is, parents can be overbearing because they want what’s best for their kids and do not always believe teachers share this same sentiment. This isn’t fair for teachers, I agree. Teachers have enough on their plates that they shouldn’t have to verbally express their devotion for their students and job to get respect and support.

But I do believe this is at the heart of overbearing behavior, and when we can make it clear to parents that we have their kids’ best interest at heart, and that doing so is why we got into the profession in the first place, parents will begin to really do what’s best for their kid, which is supporting their teacher. This is what happened with Chris.

Since my meeting with his mom, she became my number one advocate. Not only did she support every further discipline I had with Chris (and there were some more), but she was always the first to respond when I asked for parent volunteers. She went to bat for me with other parents, sent encouraging emails, and never had a negative incident again.

Chris’ mom became an ally. She was the opposite of an enemy.

This is an attitude, a mindset we must develop towards parents. When they know you care about their kid, they will go to the ends of the earth to support you. Even if that means supporting their child getting another detention for bringing in the fart machine again.