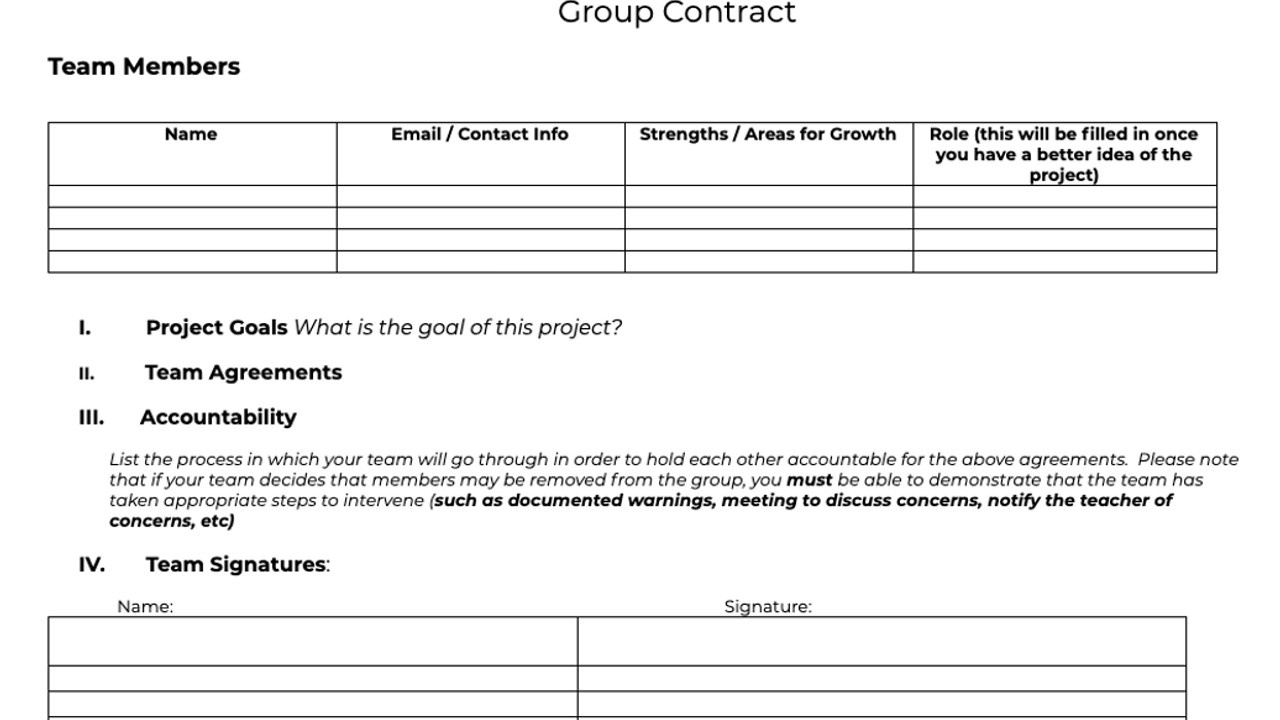 Get the Group Contract Template for FREE here.

At the beginning of any collaborative project, before any work takes place, students should fill out a group contract. A group contract is a shared document that the group members write together and sign. It’s essentially a mutual agreement made by all group members to set the norms for student collaboration throughout the project. This is a living document that can be referred to and used as a tool whenever necessary to help students hold each other accountable. 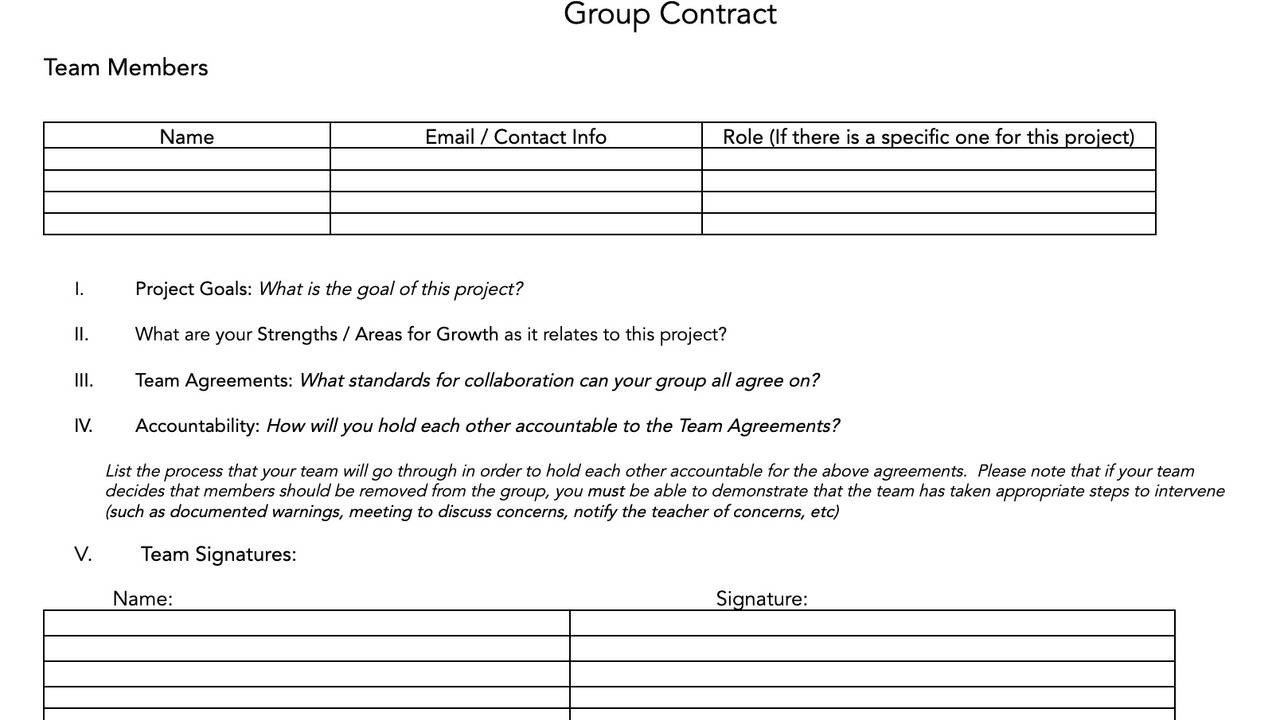 The creation of a group contract starts with a discussion among group members about each other’s strengths and weaknesses concerning whatever project or task they are working on. If students are doing some type of art project, it’s beneficial for everyone to know if someone loves making art. If there is a video component, this is an opportunity for a student with video skills to let everyone else know. If the project involves public speaking and a student is deathly afraid of it, they would share this with their group members during this part of the process.

This does not mean if someone is strong in a certain area that they will be assigned a certain role or that a kid afraid of public speaking won’t have to present. The point of this process is for students to get acquainted with one another, so they have extra knowledge to strengthen collaboration later on.

Classroom relationships tend to be surface level, and what students know about each other is based on certain, narrow information. When students are given a formal, directed time to talk with each other about personal strengths and room for growth, relationships go deeper. And I cannot say this enough: the heart of strong collaboration is found in relationships.

Within the context of the group contract, students must discuss what they expect from each other throughout the group project. A teacher can model or lead this discussion the first time, talking about what kind of agreements should be included in the contract. It might include team agreements such as these:

It might be helpful to ask students, “What kind of things have bothered you before during group projects?” or “If you are on a team, what do you value most from your teammates?”After gathering responses, let students know that the group contract is designed to help prevent these issues. Once students have a handle on how to create team agreements, allow them to discuss among themselves what they think should be included.

An important part of drawing up a group contract is coming up with the consequences for not meeting the team expectations. It’s helpful to have a system through which each student is allotted a certain number of warnings or strikes before more serious action is taken. When creating the contract, students should decide how many warnings each group member should get. If someone is off-task or violates the contract, group members are responsible for giving those warnings to each other.

If a student was absent from school and did not check-in with other group members, leaving the group unable to work that day, the group should collectively give that student a warning. This isn’t an argument or even a confrontation but a clear statement recognizing someone did not uphold the group contract. The student who was absent might not have been aware they affected the group, but this warning now makes sure they are. It helps prevent resentment and all of the consequences of not communicating issues. When one student receives a warning from the group, it is a wakeup call to collaborate better and work harder. This usually results in no further issues.

Sometimes a student keeps violating the team agreements and uses up all of their warnings. This results in the more serious action, which is up for the teacher to decide. In my classes, it’s usually a sit-down meeting with me, the teacher. Meeting with a teacher is the result of multiple warnings and can never be used as a first option. Students need to learn how to manage issues with each other and cannot always turn to authority to resolve them.

This is true in the workplace as well. Going to a manager with every grievance one has for someone else is not efficient. It’s a waste of the manager’s time, and probably a waste of the employees.

At this meeting, I allow both sides to share their grievances and defense, letting group members air out their problems. I spend this time mainly listening, and quite often the conversation goes like this:

The teacher should mainly listen during this part, as sometimes groups just need the space to vent. It’s easy to want to jump in and try to solve the problem, but conflict resolution is much more successful when students lead the way. Teachers should be conflict mediators, making sure language and tone does not become disrespectful, and that conversation is moving in a positive direction.

At the bottom of the group contract is an opportunity for students to sign it. This is their opportunity to commit to their group that they will follow the norms of collaboration. Will there potentially be violations of the contract?

Of course. Students are human and need grace. But by working on this as a group and making this covenant, group work has a strong foundation and students are set up for success.

You can get the Group Contract Template as well as other tools for student collaboration for free here.

Get the Free Collaboration Toolkit