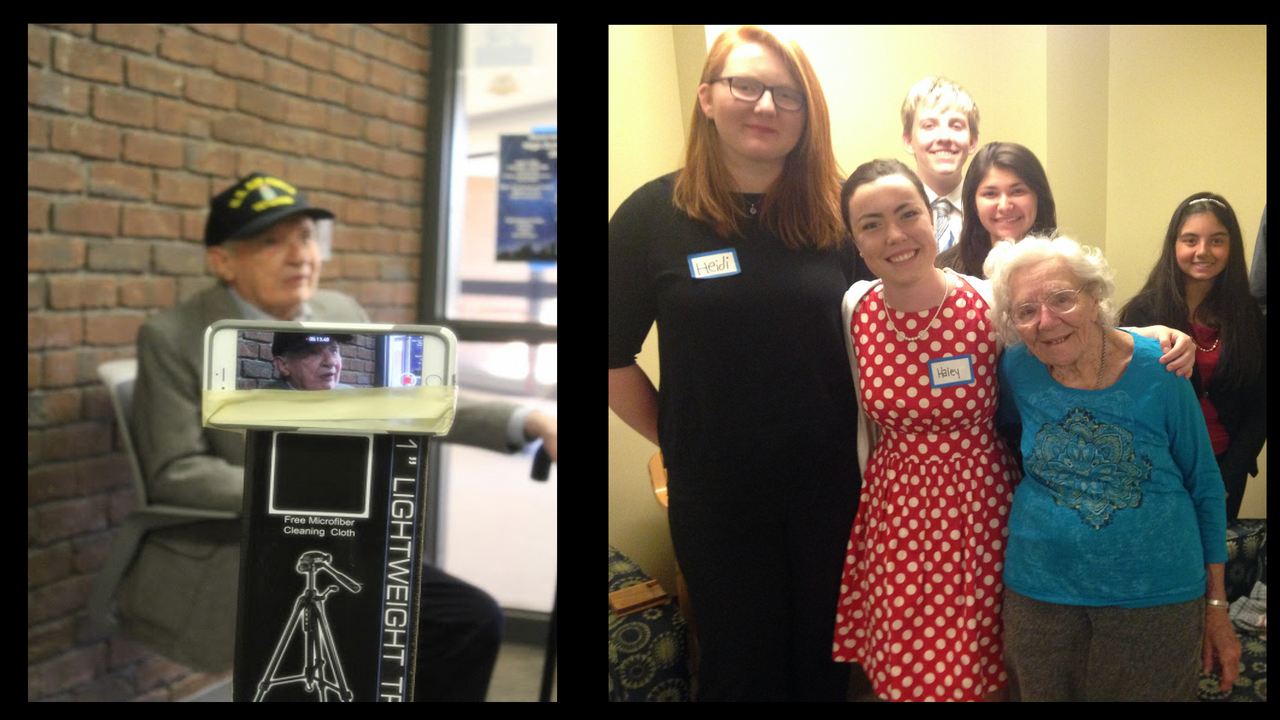 Ninety-three year old hands grasp the palms of fourteen year-old high school students as a group of seniors make their way off a bus and into a movie theater. Some of these same wrinkled hands held M1 carbine rifles on the day the US invaded Normandy. One set of hands held a poultice on the stomach of a dying best friend at the Battle of the Bulge. And another pair shook with relief as they held a newspaper that read that the war was finally over.

Now these World War II veterans are holding the hands of teenagers over seventy years later. These teenagers interviewed the veterans a month earlier, and filmed the experience with cell phones and cheap video cameras. They used free online editing software to turn the footage into documentaries that will premier at this old theater, and give the veterans and their families a way to preserve their stories forever. This red carpet event was originally conceived simply as a place for the students to showcase their work at the end of a history project.

But then the news found out about it.

And over 400 community members crowded into the small theater. And when the veterans ambled into the auditorium behind walkers and in wheelchairs, the crowd roared so loud that people claimed to have heard the applause from the streets. A man with a bent back leaning over a walker stood a little taller as he walked down that red carpet. For two hours, people laughed, cried, and cheered as they watched 6-minute films bring the stories of these veterans to life.

Films made by a group of high school students.

One man said that in the seventy years since he’s been home from the war, he’d never once been thanked for his service, and that this was one of the best nights of his life.

This man was no longer a number. In the eyes of 124 public high school students, he was a hero, and his story will not die with him.

And this was no longer just a history project.

Because instead of learning about World War II from lectures and textbooks, these students learned about it from him. Someone who was there; a primary source who breathed the air of the time and lived the stories.

What do you think the chances are that the students will ever forget this experience? These kids were motivated to learn and work by something way more profound than grades, parents, and even me, their teacher. They were motivated by capturing and telling the stories of World War II veterans, and getting to share these stories with the world. 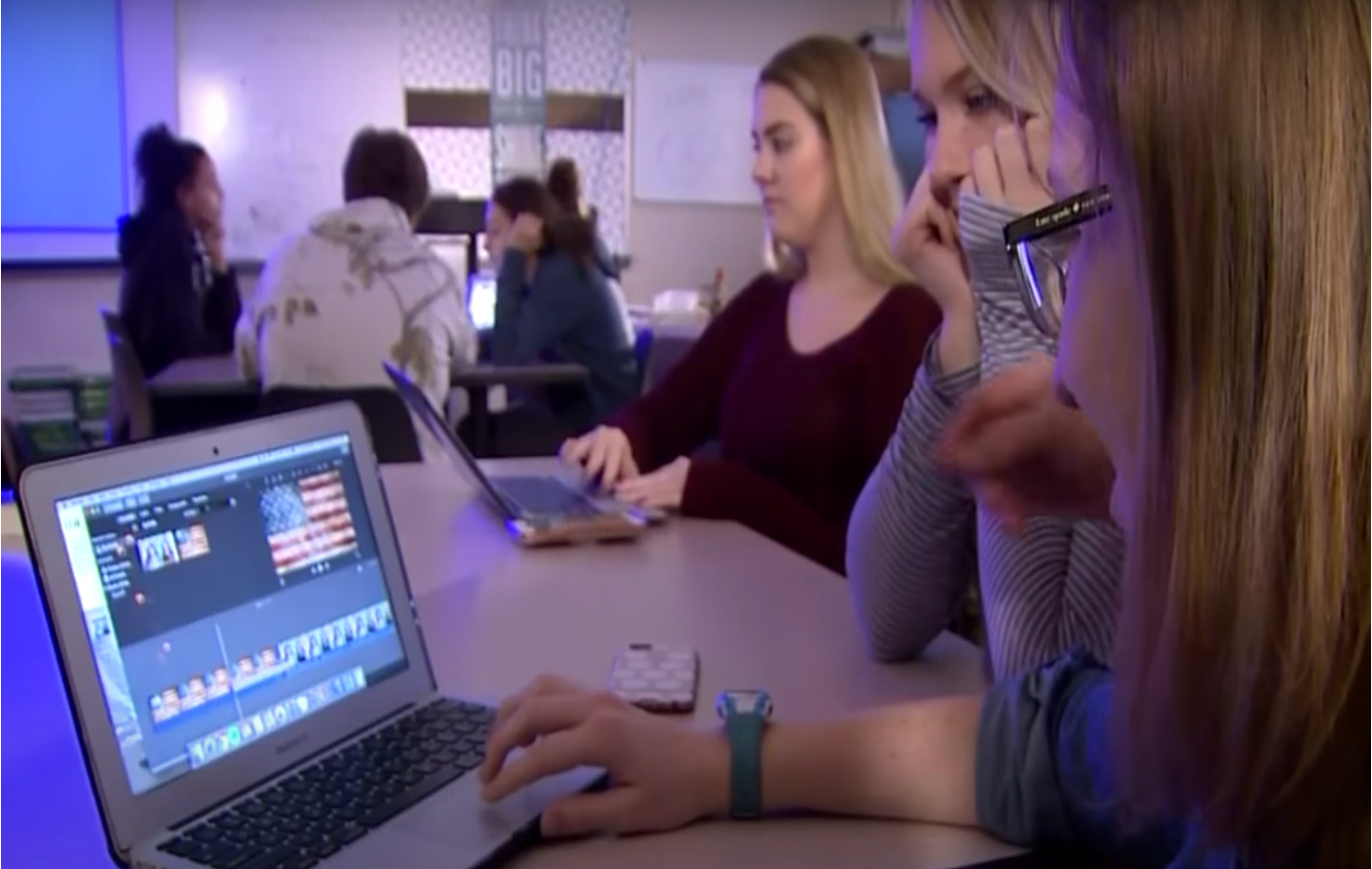 When I was in high school, I learned about World War II from pages 269-298 in Prentice Hall’s student edition of Modern World History. It told me that D-Day occurred on June 6th, 1944, in Normandy, France. I read that this was the Allied Force’s first foothold in Europe during the war. The book taught that 9000 Allied soldiers died in the attack, but 100,000 were able to land on the beaches of France using Higgins Boats at the end of the battle.

I read the chapter twice and memorized every fact that I needed to remember. When it came time to answer the study questions at the end of the textbook chapter, I got every one of them correct. And on the test, I scored an easy A.

Twenty years later, I remember none of it. This information is no longer living at the front of my brain. As a matter of fact, I discarded most of it when I got my test score back, and knew I could not retake the test. The knowledge I gained from the textbook and lectures was useless to me, and I’d much rather use my mental capacity at that time to remember more critical things, like all the dance moves to Hammer Time, or how to beat Zelda. I did not care to remember the dates and details of a war that was long over and did not relate to the minuscule bubble I lived in.

Here’s the thing though, the World War II content that I was presented with in high school is every bit as compelling as the content my students are learning today. The stories of heroism and valor could be found within my history teacher’s state standards, and even hidden in places on that ancient textbook. But they were not presented to me in a way that I could retain them. They were instead facts and information about people and places that had nothing to do with me.

My body and mind were not engaged, and a disengaged student retains very little that you teach them. They might remember it for a time, but that information is stored on the short-term memory shelves of one’s brain. It is temporary. Inconsequential.

Why we did this project.

Watch the News Video About This Project

I led my students through this project for two main reasons. First, my grandfather fought in the Pacific during World War II, earned a Purple Heart, and then spent his life raising a family and loving his community. Unfortunately, no one ever took the time to record my grandpa's story, and so when he passed, his story only lives on in the minds of those he told it to. What I would give to have a video of my grandfather sharing his stories.

That is the first reason I designed this project: for my students to give that gift to these veteran's families. The other reason is because authenticity drives student-learning. By giving purpose to the learning, students are more engaged, the learning is memorable, and they are getting to exercise and develop essential skills they would not have developed otherwise.

Many students might not be motivated by grades, or parent pressure, or academic achievement, but I've found that most are inspired by getting to honor others. Humans are driven by purposeful work. When we know there is a strong WHY, we will overcome all of the HOWS. It is no different with students.

Not every learning experience needs to be this big and magnanimous to be powerful. Instead, we just need to consider how to introduce real problems to students, and then guide them as they figure out how to solve them. This leads to deeper learning and more engaged students.

I did this project 5 years in a row with students, and then we could no longer find WWII veterans to interview. This chokes me up even writing this. But it also reminds me why we did this project.